Delicate and meticulous marquetry produced since the Safavid period: at this time, Khatam was so popular in the court that princes learned this technique at the same level of music or painting. In the 18th and 19th centuries, katahm declined, before being stimulated under the reign of Reza Shah, with the creation of craft schools in Tehran, Isfahan, and Shiraz. "Khatam" means "incrustation", and "Khatam-kari" (Persian:خاتم کاری), "incrustation work". This craft consists in the production of incrustation patterns (generally star shaped), with thin sticks of wood (ebony, teak, ziziphus, orange, rose), brass (for golden parts), camel bones (white parts). Ivory, gold or silver can also be used for collection objects. Sticks are assembled in triangular beams, themselves assembled and glued in a strict order to a cylinder, 70 cm in diameter, whose cross-section is the main motif: a six-branch star included in a hexagon. These cylinders are cut into shorter cylinders, and then compressed and dried between two wooden plates, before being sliced for the last time, in 1 mm wide tranches. These sections are ready to be plated and glued on the object to be decorated, before lacquer finishing. The tranche can also be softened through heating in order to wrap around objects. Many objects can be decorated in this fashion, such as: jewellery/decorative boxes, chessboards,  cadres, pipes, desks, frames or some musical instruments. Khatam can be used on Persian miniature, realizing true work of art. This craft existed for more than 700 years and is still perennial in Shiraz and Isfahan. 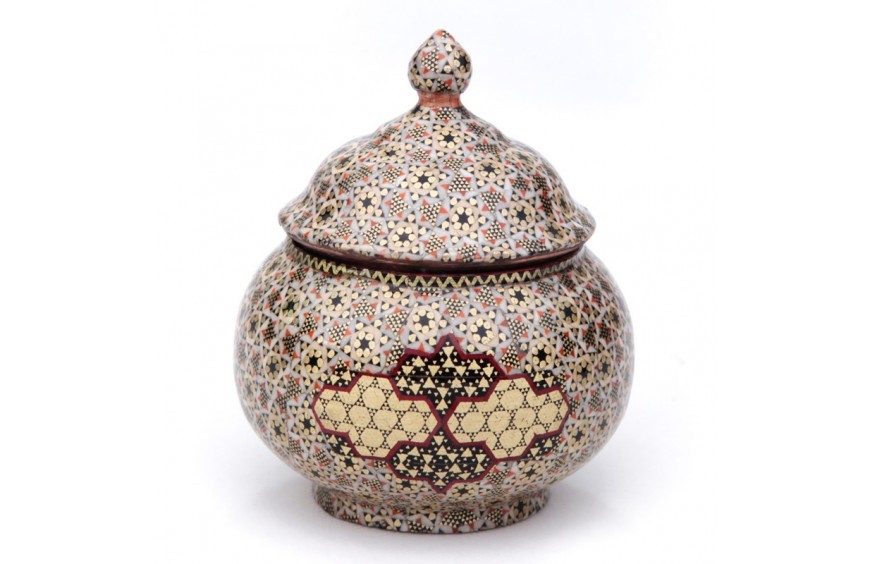